Among the many being honoured on this International Women’s Day is Canadian figure skating champion Tessa Virtue. 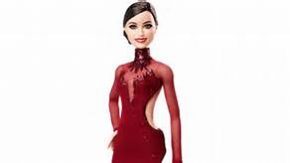 Mattel has included her in its “Closing the Dream Gap” programme by creating a Barbie Doll in her image.

The “Virtue Barbie” is among a group of 20 dolls Mattel has created to celebrate women’s accomplishments; recognizing women as truck drivers, cyclists, scientists and of course world champion figure skaters.