For the 20th year, Torontonians are getting a look a buildings they’re not normally allowed to access.

Places like Mayor John Tory’s office at City Hall, and the Zoomerplex here in Liberty Village are giving people a look at what goes on behind the scenes. 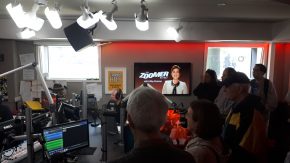 For the 20th year of the festival, the theme is “20 Something.” They’re looking back at the 20-year history of the event while looking ahead at the same time. This is the largest doors open event in North America.

Organizers say they want to show off architecturally, historically, culturally and socially significant buildings across the city.