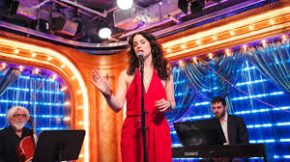 The play officially opened last night at the The Kennedy Center in Washington, D.C.

The play is scheduled for more than 30 cities in the US.  A production of “The Bands Visit” is scheduled to play Toronto September 17th to October 20th.

For the last several years Chilina has wowed the Great White Way with her portrayal of Carole King in the musical “Beautiful” which has played Toronto’s Mirvish Theatres twice.