Sir Paul McCartney has a new endeavour.  He is writing his first stage musical, an adaptation of Frank Capra’s 1946 classic “It’s a Wonderful Life.” 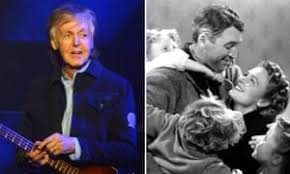 McCartney says he’d never considered writing a musical, but after meeting Kenwright and Hall three years ago, thought it might be interesting and fun.

The movie tells the story of small town banker George Bailey, who is wracked with regret but who is shown the the value of his life by “Clarence” his guardian angel.

The film is a perennial favourite on TV around Christmas time.

The producers are aiming to launch the musical in late 2020.