Gerald Butts is back. 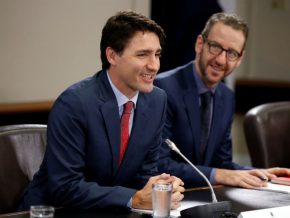 A party spokesperson has confirmed the news.

Butts left the Prime Minister’s Office five months ago at the height of the SNC Lavalin scandal, after former cabinet minister Jody Wilson-Raybould accused staff in the PMO of pressuring her to resolve the corruption and fraud case against the Montreal engineering giant in an effort to spare SNC from criminal prosecution.

What role Butts will play in the upcoming election is unclear.

The prime minister is more closely associated with Gerald Butts than he is with any other single advisor.

Conservative Leader Andrew Scheer posted on twitter, “And just like that, the Trudeau team that brought Canadians the S-N-C Lavalin scandal is right back together.”

Conservative Finance Critic Pierre Poilievre is scheduled to hold a news conference at 9:30 Monday morning to offer official reaction on the return of Gerald Butts to the Prime Minister’s inner circle.