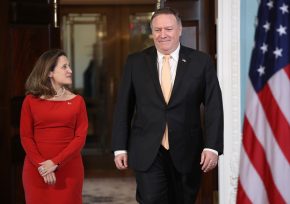 Security has been visibly heightened around the capital as U.S. Secretary of State Mike Pompeo makes a working visit to Ottawa to meet with Foreign Affairs Minister Chrystia Freeland and Prime Minister Justin Trudeau.

Staff in Freeland’s office says discussions will centre around Canada-U.S. co-operation on several domestic and international fronts, as well as security and foreign policy matters.

Issues around China are certainly expected to come up, with the 2 Canadians still detained there, and the U.S. President’s negotiations with China over trade.

On Wednesday, Donald Trump told White House reporters he is the chosen one to get this deal done.

“Over the last five or six years, China’s made $500-billion dollars (by ripping) it out of the United States, and not only that, if you take a look, international property theft, add that to it. Somebody had to do it. I am the chosen one,” Trump said as he looked at the sky, “So I’m taking on China.”

The visit by the U.S. Secretary of State to Ottawa comes just ahead of the G7 leaders’ summit in France where Trudeau is scheduled to travel this weekend.