The Toronto Wolfpack won promotion to the top-tier Super League on Saturday, rallying for 20 second-half points in a 24-6 comeback win over Featherstone Rovers in the Million Pound Game. 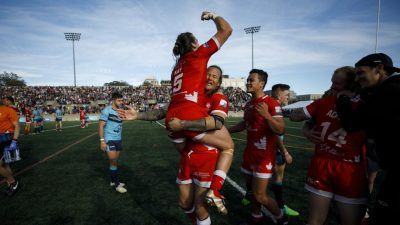 Featherstone gave Toronto all it could handle and for a while it looked like the Wolfpack might fall at the last promotion hurdle for the second year in a row. But the transatlantic rugby league team kept coming and ran away in the final 25 minutes.

Toronto trailed 6-4 at the half, but took the lead in the 57th minute when Blake Wallace crashed over the line for a 10-6 lead with the conversion. A penalty against former Toronto forward Jack Bussey helped the Wolfpack drive.

Five minutes later, Bodene Thompson ran through the Featherstone defence to stretch the lead to 16-6 with the conversion. Joe Mellor added an insurance try in the 70th with Wallace kicking a penalty in the 80th minute.

The visitors pressed but the Wolfpack defence stood strong.