Two of Hugh Hefner’s former girl friends, are going to try and raise the dead (so to speak) and get in touch with the Playboy founder beyond the grave. 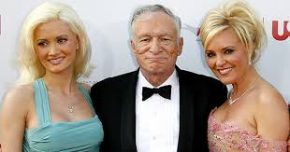 The seance will be hosted at Madison’s house on the night before Halloween. She believes her home is haunted and thinks that may be helpful in attempting to connect with the spirit world.

Hefner died two year’s ago at the Playboy Mansion in Los Angeles at the age of 91.