Pittsburgh’s sports teams are joining other organizations to honour the victims of the deadliest attack on Jews in U.S. history. 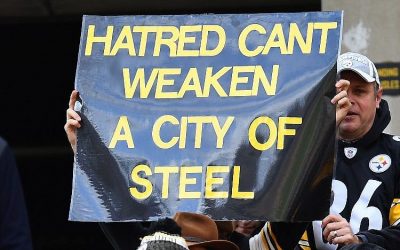 image courtesy of the Times of Israel

A year ago, the shooting at Pittsburgh’s Tree of Life synagogue left 11 worshippers dead and seven others wounded. Memorial services are being held along with numerous community service projects, and Pittsburgh’s sports teams joined in honouring the victims.

Pittsburgh Steelers president Art Rooney says his team plans to have a moment of silence at Monday night’s game to “honour the victims and their families.”

The Pittsburgh Penguins sent a tweet saying, “Hatred and discrimination have no place in Pittsburgh or anywhere else.” The Pittsburgh Pirates echoed that sentiment, saying the memory of the victims “will always be a reminder that hatred has no place in our world.”