It’s making front page news; the homeless shelter just down the street from the ZoomerPlex in Liberty Village.

Some area residents say they are fed up with the fallout of the shelter, since it opened last December.

A Toronto Sun report says one woman has been told by a 14 Division Toronto Police officer that there have been 60 arrests over eight weeks, including incidences with loaded guns.

Others who didn’t want their names used, say they’ve witnessed suspicious characters trespassing late in the evening near their townhomes, some doing drugs or having sex in a private green space in their development. 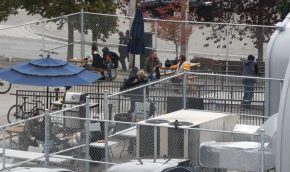 But a Toronto Police spokesperson is downplaying the reported spike in criminal activity, noting that since last October there has been an increase of 98 reported events in the area and police cannot attribute this increase to the respite centre, operated by St. Felix’s Centre.

A City of Toronto spokesperson says they are listening to feedback from Liberty village residents and business owners and are invested in making the community safe for all.