Friday marks thirty years since the Montreal Massacre, when on the evening of December 6th, 1989, a gunman entered L’Ecole Polytechnique and killed 14 women in an anti-feminist mass slaying before taking his own life.

Several events are planned across the country Friday to mark the grim 30th anniversary of the Montreal Massacre. 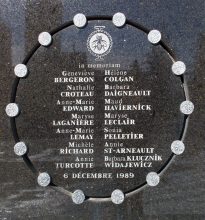 This morning, students and staff at the school’s campus will place a wreath of white roses at a commemorative plaque.

Also Friday, a book about the events and the stories behind the 14 victims written by former Le Devoir journalist Josee Boileau will be released.

At Montreal’s Mount Royal, an event begins at 5:10pm when the first shots were fired and 14 beams of light will shine over the Montreal skyline as the names of the 14 women are read aloud.

Here in Toronto, at U of T, several events are planned on this National Day of Remembrance and Action on Violence Against Women. These include an evening outdoor vigil on Philosopher’s Walk.