Any speculation that Ontario Premier Doug Ford may want to take over as federal Conservative leader has been put to rest. 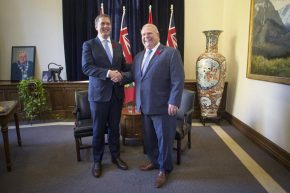 Following Andrew Scheer’s abrupt resignation Thursday, Ford wished Scheer well and thanked him for his service. But a spokesperson for Ford says the premier is focused on Ontario and has no interest in pursuing the federal Conservative leadership.

Lisa Raitt is a former Conservative critic and was a cabinet minister under former Prime Minister Stephen Harper.

Her name is being floated as a possible successor to Andrew Scheer, but she is only commenting on how the party should forward.

“What the party needs to do, is they should not be having a contest that’s going to attract 20 or 25 people,” Raitt said after Scheer’s resignation, “You need to have a very tight race so that people can define the issue, speak to it and we find that really good leader we need in order to make sure that this Trudeau government goes from minority to opposition.”