Tributes are pouring in from across Broadway in honour of Tony Award-winning composer Jerry Herman. 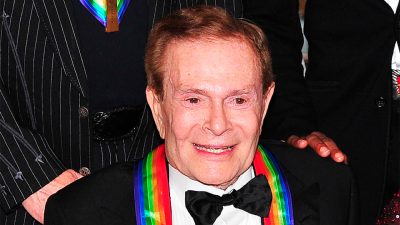 The artists behind the cheerful, good-natured music and lyrics for such classic shows as “Mame,” “Hello, Dolly!” and “La Cage aux Folles” died Thursday at 88.

His goddaughter Jane Dorian confirmed his death to The Associated Press early Friday.

He died of pulmonary complications in Miami, where he had been living with his partner, real estate broker Terry Marler.

Bernadette Peters, Harvey Fierstein and Carolee Carmello were among the stars mourning his loss.

Herman was an optimistic composer at a time when others in his profession were exploring darker feelings and material.

He also won two Grammys for the “Mame” cast album and “Hello, Dolly!” as song of the year and was a Kennedy Center honoree.

He had three original Broadway productions playing at the same time from February 1969 to May 1969.

Just a few of his song titles revealed his depth of hope; “I’ll Be Here Tomorrow,” “The Best of Times,” “Tap Your Troubles Away” and “Before the Parade Passes By.”

Herman was born in New York in 1931 and raised in Jersey City.

His parents ran a children’s summer camp in the Catskills and he taught himself the piano.

He noted that when he was born, his mother had a view of Broadway’s Winter Garden Theatre marquee from her hospital bed.

Herman dated his intention to write musicals to the time his parents took him to “Annie Get Your Gun” and he went home and played five of Irving Berlin’s songs on the piano.