Trump faces one of the greatest tests of his presidency now that Iran has launched ballistic missiles at two Iraqi bases housing U.S. troops. It was Iran’s most brazen assault on America since the 1979 seizing of the U.S. Embassy in Tehran.

Trump has huddled with his national security advisers to weigh a response. 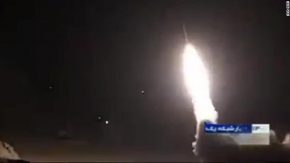 (An image taken from video shown on Iran’s Sima News reportedly shows the launch of the missiles fired at the Ain al-Asad airbase in Iraq.)

Iranian state TV says the missiles were revenge for the U.S. killing of General Qassem Soleimani.

There are no reports of American or Iraqi casualties.

Canada’s chief of defence staff says all Canadian troops are safe and accounted for after the Iranian air strikes on Iraq.

Canadians have a military and diplomatic presence in Irbil.

Hours before the Iranian missiles hit, the Canadian Forces had started to move troops out of Iraq.