CELINE RETURNS TO THE STAGE AFTER HER MOTHER'S DEATH

Canadian superstar Celine Dion, got emotional during weekend concerts after the death last week of her mother in Quebec.  Dion told an audience in Miami that she felt weak and her legs wobbly, but was coping as best she can.

Dion was with her mother Therese when she died last week. 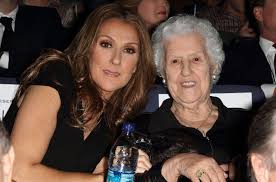 Therese Tanguay-Dion, was a Quebec TV personality who was popularly known as “Maman Dion.”

Celine was the youngest of her 14 children and passed away after what the singer  characterized as a long series of illnesses.