SIGNS OF PROGRESS BETWEEN VARIOUS TEACHERS UNIONS AND FORD TORIES

Renewed talks to get the province’s public elementary teachers a new contract resume Friday at the Sheraton Centre in downtown Toronto for a third day.

And in another crack in the teacher-government stalemate, the president of the province’s English Catholic teachers announced that they would return to the bargaining table on Monday, after talks broke off earlier this month. 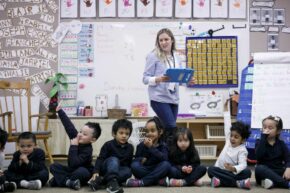 Friday is the deadline the president of the Elementary Teachers’ Federation has given to reach a deal with the government, or Sam Hammond says the province wide strike will go ahead as planned next Thursday along with ongoing rotating strikes.

ETFO rotating strikes are to hit the Peel and Hamilton-Wentworth school boards Friday.

Ontario public high school teachers get back to rotating strikes next week after taking this week off for exams. There is no sign negotiations between OSSTF representatives and the Ford Tories are going to resume anytime soon.

Elementary and secondary school French teachers are currently engaging in a work to rule campaign.