RCMP say several of their vehicles have been damaged by metal spikes at a protest site where people are opposing a natural gas pipeline in the territory of the Wet’suwet’en nation. 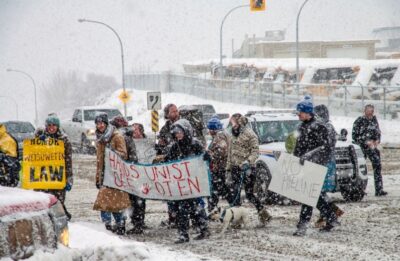 Mounties say the vehicles were damaged when they entered a court-ordered exclusion zone for protesters on Friday night.

Police have been trying to clear protesters from the exclusion zone after an injunction was ordered by the B.C. Supreme Court.

Four people were arrested by RCMP on Friday as demonstrators continued to access the site and organize blockades.

Mounties said the blockades disrupted the transfer of arrested people to a nearby police detachment and the exit of vehicles working on the Coastal GasLink pipeline.

Protesters in cities across the country have come out against the pipeline, including in Ontario where protesters have stopped railway traffic east of Toronto.