Traditional chiefs of the Wet’suwet’en First Nation have arrived in Kahnawake, Quebec, as they continue their tour of Mohawk communities in eastern Canada where rail blockades in solidarity with their cause have been erected. 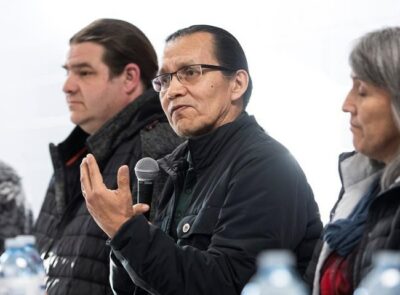 Wet’suwet’en hereditary chiefs oppose the Coastal GasLink project that would carry natural gas to the B.C. coast, though others in the community support the pipeline.

Countrywide protests and blockades followed a move by RCMP to enforce a court injunction this month against the hereditary chiefs and their supporters, who had been obstructing an access road to a Coastal GasLink work site.

Their Quebec visit comes one day after the Wet’suwet’en hereditary chiefs visited supporters at Tyendinaga Mohawk territory to thank them.

One of the hereditary chiefs said Friday his people are willing to engage in nation-to-nation talks with the B.C. and federal governments, but not until the RCMP in B.C. have left traditional Wet’suwet’en territory entirely and Coastal GasLink, the pipeline company, ceases work in the area.

The comments came after Prime Minister Justin Trudeau emerged from meetings with senior cabinet ministers on Friday saying that barricades on rail lines and other major transportation routes must come down after two weeks of calls for patience and stalled attempts at negotiation.