In one of the more delicious examples of irony to come out of the post-Brexit United Kingdom, there is word that British post-Brexit blue passports will be made in a factory in Poland. 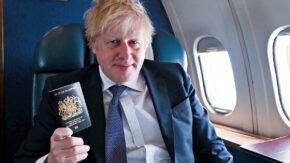 The Home Office confirms that the passports will be given to applicants beginning next month. What the Home Office isn’t reporting is that the documents will be made by a Franco/Dutch company at a factory in Poland under E.U. procurement rules.

Last year an 11-year, $300 million contract was won by a subsidiary of the French multinational group after its British competitor lost out.