Outdoor recreational amenities across the province are now closed because of the COVID-19 pandemic.

The Ford PCs at Queen’s Park are following the lead of many of Ontario’s municipalities, including Toronto, in shutting down all communal or shared, public or private spaces.

A statement released Monday night says the province has made the move based on the advice of Ontario’s Chief Medical Officer of Health, Dr. David Williams. 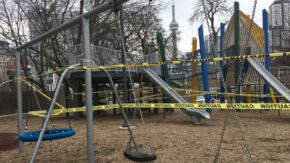 Earlier Monday, Toronto’s Mayor announced fines of between $750 and $5000 would be issued for people who do not follow physical distancing recommendations and continue to gather in big groups.

Tuesday morning, John Tory says because of the new provincial ruling, the fines could be even steeper, and he’s all for it.

“I am for the fact that if somebody is going to be that stupid and insensitive and arrogant as to climb over a gate that’s been put up specifically for health reasons to say, ‘don’t go here’, and they start playing soccer, then they should get a fine for even more than $5000,” Tory told CP24.

Mayor Tory says there are many examples this past weekend of people disrespecting the rules by climbing over barriers and playing soccer in parks.