Some evacuees in Fort McMurray are being allowed back into their homes Friday after an ice jam on the Athabasca River led to major flooding in the northern Alberta city and forced 13,000 people out of its downtown. 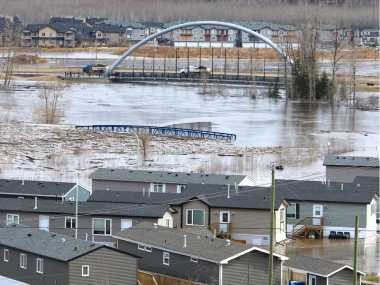 It comes as 560 residents have been evacuated in Garden River, which is on the eastern edge of Wood Buffalo National Park.

Environment Minister Jason Nixon says an ice jam on the Peace River has grown to 44 kilometres in size and could also lead to the evacuation of residents in Fox Lake.

Nixon says that could mean another 6,000 people will need help.

Back in Fort McMurray, Nixon says the toe of the Athabasca ice jam released overnight and the blockage measured about nine kilometres long, down from 25 kilometres at its peak.

The Regional Municipality of Wood Buffalo says that while some residents are being allowed to return to their homes, they might not be able to stay because utilities are not fully restored.