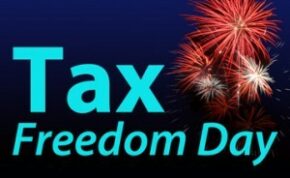 It’s earlier this year than when it landed on June 8th last year.

But this is not a reason to celebrate according to the Fraser Institute.

Tax Freedom Day measures the total yearly tax burden imposed on Canadian families by federal, provincial and municipal governments. So if you had to pay all of your taxes up front, you would give government every dollar you earned before Tax Freedom Day.

Fraser Institute President Niels Veldhuis says an earlier tax freedom day this year is not the result of governments lowering taxes, but because of incomes falling and a drop in consumption due to the economic shutdown.

Depending on the year, Canadians and Americans swap places for who pays more taxes. For the most part, both countries hover around the OECD average.

And both Canada and the U.S. remain far lower than high-tax countries such as Luxembourg, Norway, Denmark, Switzerland and Sweden.