Toronto city councillors meet virtually Thursday to receive an update about the the city’s response to COVID-19 and debate a number of other issues. 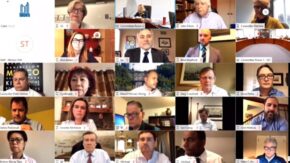 Mayor John Tory says these include a significant expansion of Toronto’s bike lane network, long Bloor-Danforth, “so that you’ll have a huge long corridor that mirrors the transit, so for those who might be anxious about transit in the early going, they’ll have a place to cycle in a safe and healthy way. We’re going to be addressing University Avenue, so similarly we’ll have a north-south spine that people can cycle safely and in a healthy manner.”

The mayor says it was all in the plans anyway, it’s just being accelerated in light of what has gone on with the pandemic.

A staff report released earlier this week calls for the city to speed up the planned expansion of its bike lane network by installing an additional 25 kilometres of dedicated cycle lanes as early as this summer.

Other items on the agenda include an extension of the property tax payment deferral program through the end of November for residents and business owners who “have no other financial options” and a plan to build hundreds of new affordable housing units as part of Phase 2 of the city’s Housing Now plan.

It’s just the second time Toronto city council will meet virtually since the start of the pandemic.