It’s an issue which has received greater attention in the aftermath of George Floyd’s murder in Minneapolis.

An online panel of experts discussed the idea of defunding Toronto Police on Wednesday evening.

The conversation was co-hosted by the Urban Alliance on Race Relations and Black Lives Matter Toronto co-founder Sandy Hudson, who’s been an advocate for reducing funding for police and increasing funding for mental health and public health in communities.

Hudson pointed to the inequity between funding of Toronto Police which receives 25 percent of tax money, while public health receives just 2 percent. 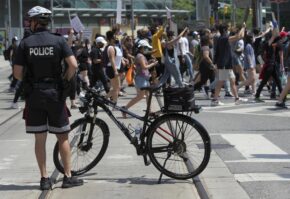 The discussion precedes a motion which will be heard at Toronto City Council on June 29th.

Councillors Josh Matlow and Kristyn Wong-Tam are proposing a 10 percent cut to the Toronto Police Budget.

Meantime, members of the Toronto Police Services Board will consider eight recommendations to combat anti black racism on the force.

Among the recommendations, an immediate move to bolster mental health services and gather community input on the police budget.

Mayor John Tory says we must not miss the opportunity to take advantage of this unprecedented time.