GATHERINGS OF MORE THAN 10 WILL NOT BE ALLOWED BEFORE STAGE 3: ONTARIO HEALTH MINISTER

Ontario’s Health Minister has confirmed the province will not be expanding the size of allowable gatherings before regions enter Stage 3 of the COVID-19 economic reopening plan.

Christine Elliott says any increase in gatherings will be announced in conjunction with Stage 3. 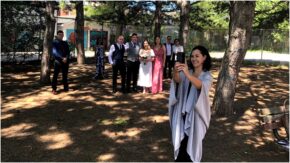 Under Stage 2 of the province’s reopening plan gatherings of no more than 10 people are permitted.

Elliott is still not attaching a date to when parts of the province will be allowed to enter the final stage of restarting the economy, which could involve the reopening of businesses such as fitness studios and movie theatres.

Public health experts say there would need to be a consistent decline in the number of new cases and hospitalizations in order to proceed to Stage 3.

New cases in the province have been trending downward, with 112 new cases confirmed Tuesday, the second lowest number of new cases in Ontario since March.