FINANCE MINISTER TO TESTIFY ON WE CHARITY CONTROVERSY

A House of Commons committee probing the cancelled agreement with WE charity for the cancelled student-volunteer program will hear from the finance minister tomorrow. 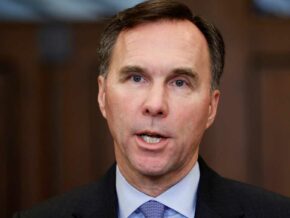 Bill Morneau has apologized for not recusing himself from the cabinet discussions and vote on the agreement, given his daughters have ties to the organization.

The latest news comes after a heated day on Parliament Hill where Conservative leader Andrew Scheer accused the Prime Minister of corruption and hiding behind the COVID-19 pandemic to cover his own mistakes.

“When they’re pushing $300-billion worth of deficit out the door, they will stop and take the time to reward their friends,” said Scheer during question period. “That is the essence of this Liberal Party under this Liberal Prime Minister. I don’t even have a question, it’s just disgusting.”

The Prime Minister has also apologized for his government’s handling of the contract, that went to WE Charity before the deal was cancelled.

Trudeau has defended every action his government has done as being in the country’s best interest and took exception to Scheer’s accusations.

“One would think that when the House of Commons is about to pass legislation worth over $50-billion, that there might be a question from the opposition,” said Trudeau. “Or on anything they want to bring forward.”

Craig and Mark Kielberger, the founders of WE Charity will appear in front of a House of Commons committee next week.