THE LAST OF THE GOLDEN AGE STARS DIES

She was a two-time Oscar winner and for decades the last surviving star of “Gone With the Wind.” 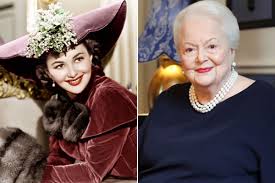 Olivia de Haviland has died at her home in Paris where she’d lived for six decades.

De Havilland emerged as a star during the classic movie era, first as a romantic partner for Errol Flynn in swashbucklers like “Captain Blood” and “The Adventures of Robin Hood” and then as Melanie Hamilton Wilkes in “Gone With the Wind.”

The British/American was made a Dame by Queen Elizabeth in 2017.