There is a scene of utter devastation in Beirut, a day after a massive explosion at the port of the Lebanese capital killed at least 100 people and wounded thousands. 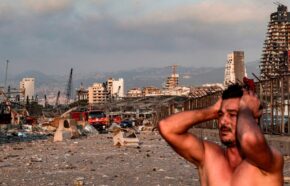 Smoke was still rising from the area Wednesday at midday.

Major downtown streets are littered with debris and damaged vehicles.

Building facades have been blown out.

It now appears that the detonation of more than 2700 tonnes of ammonium nitrate caused the devastating explosion in Beirut.

A Lebanese cabinet minister says the material had been stored at a warehouse at a dock since 2014.

The federal liberals in Ottawa have pledged whatever help can be provided, while it’s been confirmed by Global Affairs Canada long-time Montreal resident Nizar Najarian, who recently returned to his home country, was killed in the blast.

A member of the Canadian Forces suffered non-life threatening injuries.

The Toronto sign in Nathan Phillips Square was dimmed in solidarity with the people of Lebanon on Tuesday night.