He was considered one of the finest classical guitarists of the modern age. 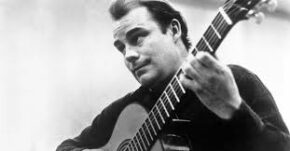 Guitar and lute player Julian Bream has died at his home in England.

The virtuoso musician performed globally during his heyday and was renowned for his recordings of new compositions. He took home four of the 20 Grammy’s he was nominated for.

He was a self taught child prodigy, recognized by the Royal Academy of Music as one of the most remarkable artists of the post-World War II era.