Toronto is considering an ambitious new plan to combat homelessness as the COVID-19 pandemic continues to exacerbate the issue. 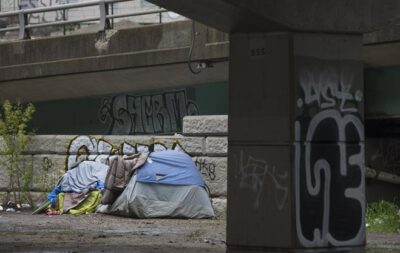 In a draft report developed by the Shelter, Support and Housing Administration in conjunction with United Way, city officials have put forward a number of potential strategies to get people off the street and keep them housed.

One of the primary ideas suggested in the report is for the city to lease and purchase old buildings and office spaces to be converted into permanent housing.

Other proposals include the transformation of existing emergency shelter spaces into permanent housing units; the rapid construction of modular housing; and the creation of a more robust network of harm reduction and addiction resources.

The report does not give an idea of how much money would be needed to make the plan a reality, but Toronto MP Adam Vaughan says it would likely cost hundreds of millions of dollars per year.

Vaughan, an advocate for increased public spending on housing, acknowledges the price tag may upset residents worried about higher taxes, but says the end result would significantly cut costs already allocated to treating the symptoms of homelessness, as well as improving society as a whole.