BACK TO SCHOOL BEGINS IN STAGGERED STARTS ACROSS GTA SCHOOL BOARDS

For the first time in nearly six months, students in Ontario begin the process of returning to class.

It was back on March 13th, the governing PCs closed all schools in the province as COVID-19 cases began to rise. 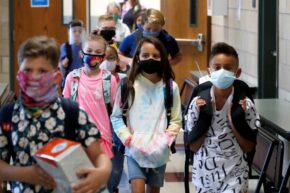 “For the overwhelming majority, for that 70 to 75-percent of parents who’ve opted for that, that the health and safety protocol unveiled by the province, fully endorsed by the chief medical officer and fully funded by the province, it is going to ensure that these kids can be safe while in school,” Lecce explained.

Lecce followed that up by saying we all have a moral obligation to the next generation to adhere to public health advice and to not let down our guard as a society.

The presidents of all four major teacher federations have gone to the Ontario Labour Board, arguing that public health guidelines in elementary schools do not follow the same rules as everywhere else in the province.

Schools in the City of Toronto reopen Tuesday September 15th. But the other GTA school boards are reopening schools in staggered starts this week, including in Peel, Durham, Halton and York Regions as well as in the Dufferin-Peel Catholic District School Board.