BELARUS ACTIVIST RESISTS EFFORT TO DEPORT HER TO UKRAINE

A leading opposition activist in Belarus is being held after she resisted attempts to deport her to Ukraine as part of a crackdown on protests of authoritarian President Alexander Lukashenko. 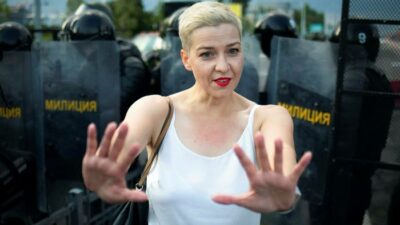 Activist Maria Kolesnikova was detained Monday in the capital of Minsk with two other members of the Coordination Council, which was created by the opposition to facilitate talks with Lukashenko on a transition of power.

They were driven to the Ukrainian border, where the Belarusian authorities told them to cross into Ukraine.

But the activists said Kolesnikova refused, tore up her passport and stayed on the Belarusian side of the frontier in the custody of Belarusian authorities.

The others crossed into Ukraine.