TORONTO'S MAYOR IN FAVOUR OF B.C. LIKE RESTRICTIONS ON BARS TO CURB SPREAD OF COVID-19 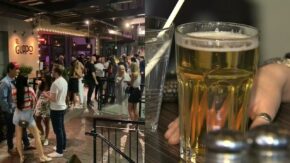 In addition, Dr. Henry says liquor sales in all bars, pubs and restaurants must stop at 10pm and these venues must close at 11pm unless they’re providing full meal service.

Toronto mayor John Tory was asked on Wednesday, if these kind of restrictions might go into effect here in this city if COVID-19 numbers keep rising.

“I already advocated to the province once, maybe a month or two ago when we were entering phase 3, that we consider stop having bars serve alcohol at midnight,” Tory explained to CP24, “These are the kinds of things where we have to watch these numbers, and they’re going in the wrong direction.”

Cases have spiked in Ontario, with 190 new cases on Sunday and 185 on Labour Day Monday.

Ontario’s Health Minister says as a result, there will be no further reopening of the province’s economy for four weeks.

All GTA public and catholic schools with the exception of the Toronto boards are reopening in staggered starts this week.