The pandemic has reshaped how the U.S. is observing the anniversary of 9-11. 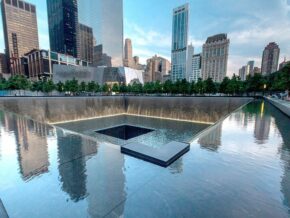 The 19th anniversary of the terror attacks of 2001 will be marked on Friday by dueling ceremonies at the September 11th memorial plaza and a nearby corner in New York City where victims’ relatives plan to recite names while keeping a safe distance. The second ceremony has been organized by the Stephen Stiller Tunnel to Towers Foundation.

The two ceremonies reflect a divide over how to observe the anniversary in a time of social distancing.

The double beams of light that evoke the fallen twin towers were nearly cancelled because of virus concerns, until an uproar sparked a change of decision.

U.S. Vice President Mike Pence will be in attendance for the New York City memorials.

The Pentagon has not yet detailed plans for the anniversary.

Twenty-four Canadians died in the 2001 terror attacks in the U.S.