Sunday night’s Emmy Awards turned into a Canadian affair, with 7 trophies in all awarded to a Canadian produced television show.
In fact, there was so much Canadian content, host Jimmy Kimmel did a sketch about it.
“I don’t know about you, but I’ve had enough of this Canadian stuff,” Kimmel joked, “Canadians have won all of the Emmys tonight and Canada only has like 200 people in it. As of tonight, one out of every four living Canadians has an Emmy award. Schitt’s Creek won 7 of them, but if they’d won one more Emmy they would’ve been able to trade them in for this; a Stanley Cup! But they didn’t so we’re going to keep it here for another 27 years, sorry Canada!” 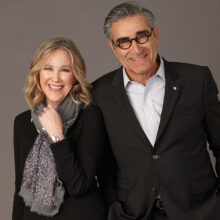 (Canadian TV series Schitt’s Creek made history at the 2020 Emmys on Sunday, sweeping the comedy category and landing its stars — including Catherine O’Hara and Eugene Levy (above) — their first ever acting Emmys. Photo: Chris Chapman)
One of the 7 for Schitt’s Creek was the best acting Emmy which went to 73 year old Hamilton born Eugene Levy, who won two Emmys decades ago as a writer on the Canadian comedy sketch show SCTV.
All four key cast members snagged Emmys including Levy’s son Daniel Levy, Ottawa’s Annie Murphy and Eugene Levy’s fellow SCTV Alumna Catherine O’Hara.
At 66, she becomes the second oldest comedic actress to win, bested only by the late Ruth Gordon who received one when she was 82.
For more on the Canadian wins at the Emmy go to Everything Zoomer online!