Toronto city councillors on Mayor John Tory’s executive committee get a look at a new report Wednesday, which projects the shortfall caused by the pandemic will be more than $1.3 billion. 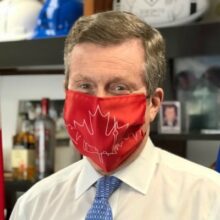 “It indicates that while we’ve had trouble caused by the pandemic, including a lot of lost TTC revenue for example, and increased costs to shelter the homeless,” Tory explained to CP24 Wednesday morning, “We have had some assistance come from the province and the federal government to help us with that and more to come. And it outlines our own measures we’ve taken to save $500-million so far through the hiring slowdowns. We’ve unfortunately some thousands of our employees who’ve been on emergency leave.”
So far the Doug Ford PCs at Queen’s Park have promised to cover half of Toronto’s shortfall, although the provincial government is planning to distribute some $4-billion generally to Ontario’s municipalities, with more assistance planned for next year.