EARLY HOPPERS MAY BE COPIES

If your art collection contains early works by one of the great American artists, you might want to take a look to make sure they’re the real deal. 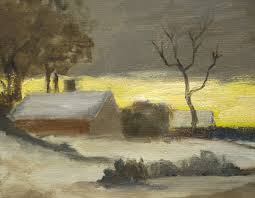 A grad student, studying early works by Edward Hopper, found several to be copies stolen from other artists. The study found that “Old Ice Pond at Nyack,” circa 1897, was the then teenage artist’s copy of an earlier painting by Bruce Crane.
The grad student, Louis Shadwick was doing research for his doctorate from the storied Courtauld Institute in London and discovered that three of Hopper’s earliest oil paintings can only barely count as original.
He found two of were reproduced in a magazine for amateur artists published in the years before Hopper’s paintings. The reproductions even came with detailed instructions for making the copies.