If you’ve been working at home during the pandemic, it seems you’re not in a rush to go back to your workplace. 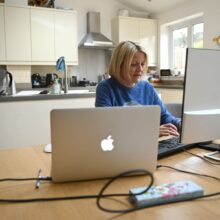 A new survey, conducted by Leger and the Association for Canadian Studies, finds a whopping 89 percent of Canadians have found working from home to be a very (48 percent) or somewhat (41 percent) positive experience. And 86 percent say they are getting used to the new lifestyle and like it.
But Canadians are divided on how they feel about the Trudeau Liberal’s economic recovery plan.
Fifty-two percent of respondents say they are very or somewhat confident in the recovery plan outlined in last week’s throne speech and believe it will create jobs and strengthen the economy in the future. Thirty-nine percent were not very or not at all confident in the plan.
Five percent of respondents say they’ve lost their jobs permanently as a result of the pandemic. But another 11 percent say they’ve experienced temporary job loss and 12 percent say they’ve lost some income. Fifteen percent say they fear losing their jobs in the next few weeks.
The online poll of 1,514 adult Canadians was conducted between September 25th and 27th. It cannot be assigned a margin of error because internet-based polls are not considered random samples.