A (MARKHAM) STAR IS BORN

The latest addition to Disney’s Marvel Universe is a grade 12 student from Markham. 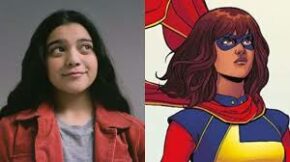 The series revolves around a fictional superhero name Kamala Khan, a Pakistani-American teen based in New Jersey and the first Muslim character to headline a Marvel comic book.

This is Vellani’s first major Hollywood project.  And although she’s only 18, she’s is an alumni of the TIFF Next Wave committee which helped shape this year’s festival.