Peel Region will remain in what was formerly known as modified stage 2. Under the new provincial COVID plan, it’s the red zone of restrictions, or CONTROL, which is just one below a full lockdown.
It’s puts a 10-person limit on indoor restaurant dining and in gyms but movie theatres will remain closed. 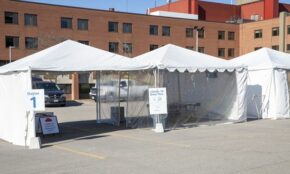 Doug Ford says infections remain high in the Peel, which is reporting 280 new cases.
“The region is averaging 103 cases per 100,000, the percent positivity in daily cases is growing, hospital capacity is under pressure as we bring in reinforcements to support case and contact management,” says Premier Ford.
Ottawa and York region are moving to the orange “restrict” level Saturday but Toronto remains in modified stage 2 until at least November 14th. Orange allows for  gatherings of 50 inside a restaurant with 4 patrons per table, and also 50 inside gyms.
The Peel decision comes after the region’s medical officer requested more time to curb the rising number of infections.
The Ontario Hospital Association is outraged at the province’s decision to slowly re-open Peel Region, calling it reckless and urging it be immediately reversed.
In the Premier’s own words, hospital capacity is under pressure in the region, and the province is sending in more contact tracers to help curb the spread