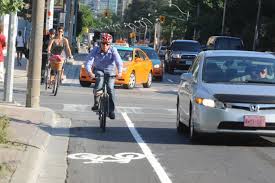 The controversial Bloor Street bike lanes that have had people talking for the past year are to be voted on today. Proponents say the pilot project was a huge success and that city staff recommended that the lanes be made permanent. Councillor Mike Layton says there are already enough votes to make that happen. But, merchants are evenly split between strong support and opposition, with complaints centred on the loss of some parking. We spoke with Matt Lee, the owner of Put A Cone On It, located in Korea Town, and Barry Alper, the face of The Annex Business Bike Alliance about issues surrounding the lanes.