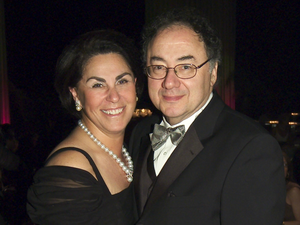 Friends and family are still reeling in shock over the deaths of prominent Toronto philanthropists Barry and Honey Sherman. Toronto Police say both died from “ligature neck compression”. A short statement was released by police Sunday night, identifying the billionaire couple found dead in their north Toronto home on Friday. Homicide investigators have taken the lead on the case although police are still classifying the deaths as suspicious. Their bodies were discovered by a real estate agent. All indications are that they were found hanging from a railing surrounding their basement pool. There was no sign of forced entry to the home and no note left behind to explain what happened. Tributes continue to pour in for the founder of generic pharmaceuticals giant Apotex and his 70 year old wife, an outgoing philanthropist whose causes ranged from higher education to healthcare to the Jewish Community. Over the weekend, multiple media reports quoted a Toronto police source saying the early theory of investigators was that Mr Sherman may have killed his wife and then took his own life. But the couple’s grown children dismissed outright that suggestion. The couple had four children and had recently welcomed a new grandchild.