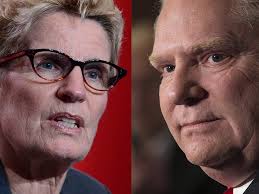 Premier Kathleen Wynne is stepping up the war of words against Doug Ford after Ford echoed Donald Trump’s “lock her up” mantra against Hillary Clinton. Ford told a crowd in Brockville that if he wins the June election, he’ll commission an outside audit of Wynne’s reckless spending. Wynne admitted that this is going to be a vicious campaign leading up to the June 7th election. Libby broke it all down with a panel of strategists including John Capobianco., Kevin Gaudet and liberal commentator Patrick Gossage.