'TRUMP SLUMP' CAUSE OF DOWNTURN IN TOURISM IN NYC

Canadians are not heading to New York and its ringing alarm bells for tourism officials in the Big Apple. 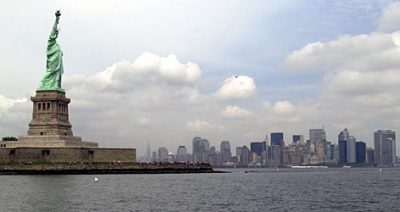 So much so, that a delegation from NYC and Company, the city’s official tourism organization, is coming to Toronto Monday to drum up support. Spokesman Fred Dixon says its clear that Donald Trump is the reason for the decline. After Monday’s meeting with tour operators in Toronto, members of the delegation head to Montreal and Quebec City. Spokesman Fred Dixon says his group predicts 300,000 fewer foreign tourists this year including a projected 17,000 fewer Canadians. NYC & Company just launched the “Welcoming the World” campaign to convince tourists that NYC is a place that welcomes everybody, despite what they call the rhetoric out of Washington. The message is written on billboards overseas. Deputy mayor for housing and development Alicia Glen said in a statement, “We’ll keep reminding visitors what we stand for, so we can keep this both the most internationally visited and the safest city in America.”