Toronto city council has approved a pilot project that will allow residents in four city wards to keep chickens in their backyards. 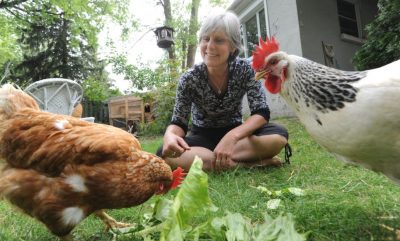 Under the project, residents can keep up to four chickens, but no roosters. Chickens won’t be allowed in apartment buildings, condos or properties without sufficient outdoor space. The pilot will run in four city wards over the next three years with an interim review in 18 months. Residents can keep up to four chickens no roosters are permitted and must register with the city. Opponents of the pilot have argued it will generate complaints and tie up the city’s bylaw enforcement officers. But City councillor Justin Di Ciano told Fight Back with Zoomer Radio’s Fight Back with Libby Znaimer, based on his personal experience of his family raising chickens, there are no drawbacks. Several municipalities in Ontario, including Kingston, Brampton, Niagara Falls and Caledon, all allow residents to keep chickens in backyard coops.

FORD GUARANTEES ONTARIANS WILL ALWAYS HAVE ACCESS TO OHIP, SWALLOWS BEE DURING REMARKS