Toronto’s Mayor is pushing for a significant tax increase, above the rate of inflation, in order to invest billions of dollars into transit and affordable housing. During a speech to the Canadian Club, John Tory made the case for raising the annual levy to pay for infrastructure. 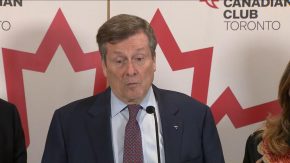 Saying it’s long overdue, Tory says he’s already spoken with a number of his council colleagues who generally support the idea. If approved by city council, Tory’s plan would see the levy increased by a cumulative nine per cent over the next six years, beginning with a 1.5 per cent increase in 2020.  By 2025 ,homeowners would likely be paying hundreds of dollars more in property taxes. After his speech Tory was asked about his plan.  “If we don’t make these investments the one thing I can promise people for sure is that this city will not be able to maintain the incredible success we have had over the last five or so years as a magnet for investment and smart people. The city will start to strangle itself on things like congestion, we won’t achieve our environmental objectives and people won’t have an adequate and affordable place to live.”