After the vote counting debacle that was the Iowa caucus, New Hampshire becomes the first primary in the U.S. as Democrats cast their ballots to pick their candidate to challenge President Donald Trump this fall. 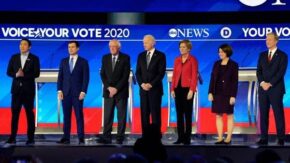 Unlike the caucus format that had the oftentimes confusing format, the primary is a straight-up secret ballot contest where voters pick their preferred candidate.

Bernie Sanders has been leading many of the polls heading into the New Hampshire vote. Buoyed by his strong showing in Iowa, Pete Buttigieg has also been showing strongly.

Former Vice-President Joe Biden, meanwhile, who has been struggling on the fundraising front, is trying to put a disappointing fourth place in Iowa behind him ahead of the primary in South Carolina later this month, where he has been a strong front runner.

Elizabeth Warren, meanwhile, finished in a strong third place in Iowa and is working to get that progressive vote that’s been siding with Sanders.

Sanders soundly beat Hillary Clinton in New Hamshire four years ago but that was a different race. It’s a much more crowded field this time compared to the two-horse race in 2016.

President Donald Trump held one of his own campaign rallies in the state on Monday night. He said the Democrats lack enthusiasm and mocked the party’s vote-counting struggles from Iowa.