MORE ACCOLADES FOR "COME FROM AWAY" 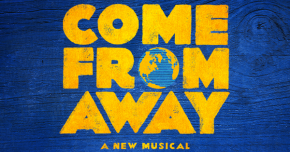 The production, which tells the story of how Gander, Newfoundland welcomed 6,500 airplane passengers and crew forced to land in the wake of the 9-11 terror attacks, was staged in Washington prior to engagements in Toronto and its current run on Broadway.