There are more allegations U.S. President Donald Trump has behaved in ways that would be impeachable if proven as true. 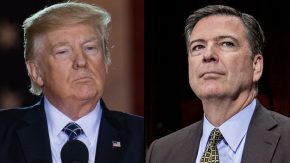 A New York Times report says Trump asked then-FBI Director James Comey to shut down the federal investigation into Trump’s former National Security Adviser Michael Flynn in an Oval Office meeting in February. The report is based on a memo that Comey wrote shortly after the meeting which quotes Trump as saying, “I hope you can see your way clear to letting this go, to letting Flynn go. He’s a good guy.”

The documentation of Trump’s request is the clearest evidence to date the president has directly tried to obstruct justice. The White House issued a furious denial after the notes were disclosed.

“We had a very very successful meeting with the foreign minister of Russia,” Trump explained to reporters on Tuesday, “Our fight is with ISIS as General McMaster said. I thought he said and I know he feels that we actually had a great meeting with the foreign minister, so we’re going to have a lot of great success over the next coming years and we want to get as many involved to help fight terrorism as possible.”

Meantime, Isreal has yet to acknowledge reports it was the source of the highly classified information about an Islamic State plot that Trump divulged to Russian diplomats last week.