He’s expected to point to smaller-than-anticipated annual deficits in the years ahead. Morneau told the House of Commons yesterday that’s because the economy is doing better. 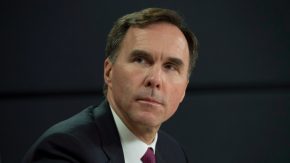 “A couple of years ago we told Canadians we would invest in middle class families,” Morneau explained, “We told them we’d lower their taxes, we told them we’d increase the Canada Child Benefit, and what we’ve seen, is in fact, Canadian families are better off and our economy’s better off.”

Morneau’s recent tax proposals will not be fully costed in today’s fiscal update.

The Trudeau Liberals have been fielding complaints about Morneau’s package of proposed small-business tax reforms, some of which he was forced to tweak after a backlash from doctors, farmers, tax experts and even some Liberal backbench MPs.

Aaron Wudrick of the Canadian Taxpayers Federation told Zoomer Radio’s Fight Back with Libby Znaimer, the government has a bit of a credibility problem right now.

“They have said for a long time, the reason they’re running big deficits is to get the economy humming, well it’s humming now, so I think it’s going to be hard for them to justify continuing to spend more money than they have and the minister, he was supposed to be the rock solid fiscal credibility of this government. And as we all know, he has now been under fire for months and months and it seems to get worse by the day,” explained Wudrick.

The finance minister announced last week a plan to put his family business assets in a blind trust after failing to do so when he got into federal politics two years ago.